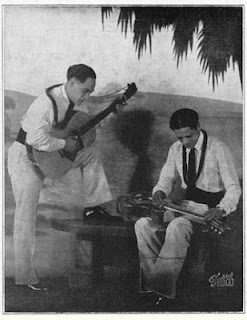 In the story of Hawaiian music the steel guitar stands out as the single most important instrument that helped defining a style and a sound. The original steel guitar was just a wooden conventional guitar with a converter nut slipped in to raise the strings, and played with a steel bar. Since it is laid flat on the player's knees, the sound is directed to the ceiling. To give it more volume in the early days before electric instruments were invented, visionary guitar manufacturers used the material church bells are made of for the body of the instrument and coated it with German silver. These guitars were much louder thanks to the steel body and a build-in acoustic resonator system with the aim of amplifying the sound. They were soon preferred by musicians playing the steel guitar. A US company manufacturing plucked string instruments, 'National', specialized in these steel bodied guitars - the story of these fascinating instruments is told in Bob Brozman's excellent book  'The History and Artistry of National Resonator Instruments'- and they were soon promoted by pioneering master Hawaiian lap steel players like i.e. Sol Hoopii. Other musicians followed the trend, among them Bob Pauole - the lap steel player of Jim & Bob,' The Genial Hawaiians' duo, - on the photo holding the preferred National Tricone resonator model in his lap while the standing Jim Holstein holds a conventional wooden body guitar.- A new cd from the Grass Skirt Records label specializing in re- issuing recordings of early steel guitar players, gives the listener the opportunity to experience the sound of the National Tricone lap steel guitar as played by original masters of the instrument like Bob Pauole and Charles Opunui. 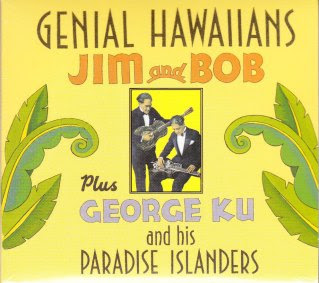 The cd contains the total recorded output by Jim & Bob - The Genial Hawaiians (12 sides recorded in a single session December 1933 for Victor) and twelve sides cut for Victor and Brunswick in two sessions May and November-December 1932 by George Ku and his Paradise Islanders. The 24 tracks on the disc is accompanied by a 32 pages booklet loaded with carefully researched info on the bio and career of the featured musicians by Cyril LeFebvre and Les Cook plus additional info on the recordings by Michel Messer, Martin Wheatley, John Marsden, Stacy Phillips and Bob Brozman. Audio restoration of the original 78 rpm discs was maintained by Ted Kendall and provides the disc with superb sound. Front cover illustration as shown above is designed by Robert Armstrong. 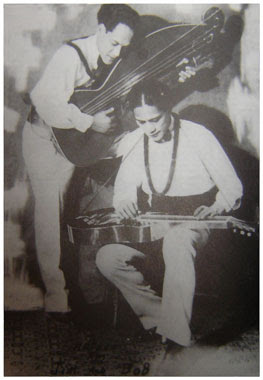 Among collectors and connoisseurs of recordings by original Hawaiian lap steel guitar players the sides cut December 1933 by Jim Holstein and Bob Pauole for Victor and released on the Bluebird label have long been considered highlights of acoustic steel guitar playing thanks to the virtuosity and complete mastering of the instrument held by Bob Pauole. However, until recently only few details of the duo performing on the 12 recorded sides have been known, but the booklet of the new Grass Skirt cd finally provides solid, researched info on the careers of Jim Holstein and Bob Pauole. Here I'll just mention a few guidelines, interested readers are pointed to the published notes by Cyril LeFebvre and Les Cook in the booklet. - Both Jim Holstein and Bob Pauole were native Islanders with a musical family background, like many other Islanders at the dawn of the 20th Century they moved to the US mainland to seek their fortune as musicians. They met around 1924 and soon formed a duo and performed in theatres and similar venues for some time, at one point they were hired as staff musicians at a radio station located in Chicago and from then on they had success. They were billed as Jim & Bob - The Genial Hawaiians and now reached a large public through daily broadcasts. They performed as radio stars until 1936 when Jim Holstein suddenly died from a stroke, and the only time they recorded together was in the Victor session made in December 1933. The twelve sides give us a glimpse of the repertoire performed by the duo in their radio shows.- The contemporary listener maybe would have expected a series of popular Hawaiian tunes evoking a palm breeze and imagination of dancing hula maids in grass skirts, but that's not the game here. There are six instrumental sides and six with vocal, Jim Holstein sings lead vocal and Bob Pauole joins in on second voice - all vocal tunes are sung in English. The vocal tunes are from the Tin Pan Alley repertoire of the day, some of them were made popular through contemporary films - here's an example as performed by Jim & Bob, audio uploaded at YouTube


Among the recorded instrumental sides by Jim & Bob there is the duo's version of W.C. Handy's 'St. Louis Blues' featuring Bob Pauole on lead steel guitar accompanied by Jim Holstein's precise conventional rhythm guitar, notice the tempo changes throughout the tune, the perfect interplay and Bob's improvisation skills on the steel guitar as demonstrated in this audio video from YouTube


The highlight of the recorded instrumental tunes by Jim & Bob is the duo's version of the popular piece of rural Americana known as 'Home on The Range', on the record label the tune has been renamed 'The Song of the Range' 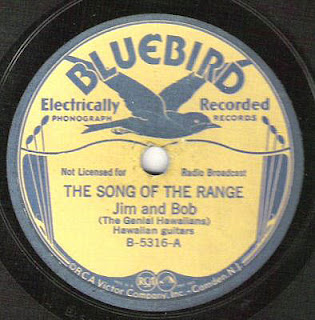 The recording of 'The Song of the Range' by Jim & Bob - The Genial Hawaiians from their December 1933 session for Victor has deservedly become famous among other steel guitar players and collectors thanks to the virtuosity of Bob Pauole showing off complete mastering of intonation, tone, tempo and improvisation skills. The new cd from Grass Skirt Records finally gives the contemporary listener a chance to enjoy this musical pearl in suberb audio, and the cd is worth your money alone thanks to this great recording. 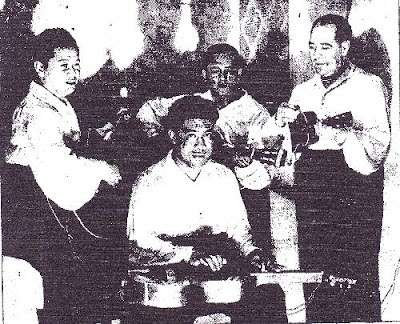 As mentioned, the Grass Skirt cd also features 12 sides by George Ku and His Paradise Islanders, 8 sides cut for Victor and 4 sides for Brunswick at a couple of sessions in 1932. The story of George Ku and his group is reported in detail in the accompanying booklet, here it just shall be mentioned in addition to the recordings that the steel guitar player of the ensemble, Charles Opunui, draws the attention. Charles Opunui demonstrates great skills as a steel guitarist in a repertoire of conventional Hawaiian tunes, both instrumental and some with beautiful ensemble vocal in local tongue. His style has been characterized by Martin Wheatley as a cross between that of Sol Hoopii and King Bennie Nawahi. My impression judging from the audio of the disc is that Charles Opunui was quite modern for his time, his complex chord building and mastering of the steel bar anticipates a playing technique later evolved by electric steel guitar players. You have the chance to explore his advanced technique through repeated listening, if you buy the cd. The cd is available for online purchase at the website of Grass Skirt Records, get it
here.
NB! The introducing notes above on the steel guitar is partly excerpted from the website of Hawaiian Steel Guitar Association
---
Jo
keepswinging@live.nl

In the story of popular Hawaiian music the steel guitar helped defining a style and a sound. From the vaults of historical recordings by Hawaiian artists the 12 sides cut for Victor in December 1933 by Jim & Bob - The Genial Hawaiians stand out as important examples of a peak point of virtuosic interplay and mastering of the acoustic steel guitar. - The new cd from Grass Skirt Records presents the 12 sides by Jim & Bob in superb audio, and the cd adds the twelve sides by George Ku and his Paradise Islanders recorded for Victor and Brunswick in 1932 show casting the elaborate technique by the ensemble's steel guitarist, Charles Opunui. - The Keep(It)Swinging blog loves to inform you about such important reissues and generally covers jazz and related music recorded 1912 to 2012.