Cherokee has been recorded over the years by many jazz musicians and singers, including Charlie Parker, Charlie Barnet and His Orchestra, the Count Basie Orchestra, Duke Ellington, Sarah Vaughan, Art Tatum a.o.
Charlie Parker used Cherokee for the basis of his 1945 composition Ko-Ko. The song has also been covered as an instrumental by Bud Powell, Clifford Brown, Don Byas, Stan Getz, Lionel Hampton, Harry James, Johnny Smith a.o.

Below is inserted some examples of different versions of Cherokee. The original version by Ray Noble and his Orchestra was recorded in October 1938 for Brunswick

In 1946 Charlie Parker took part in a live recording session in Los Angeles featuring Nat King Cole Trio extended with Benny Carter and Willie Smith (as) besides Parker; one of the recorded tunes was Cherokee

As mentioned above, Charlie Parker used Cherokee as the basis for his own composition Ko-Ko, first recorded by Parker's Reboppers featuring Dizzy Gillespie (tp,p), Curley Russel (b) and Max Roach (d) in November 1945

"One time I went to New York, for only four days... and they didn`t allow me to play because I was not associated to the Federation of Musicians. And the Federation required at least six months of residence before being accepted. Then if they said no, I had to get back. Imagine that I had the money to spend during those six months, but if they then didn`t accept me? How could I return [...], having run out of money? I went away and never returned." (Sopeña, G.: Oscar Alemán. Abrazado a mi cavaquinho. Crisis, Nº 21 pp. 29-35 - January 1975) (English translation by 'Tito' Liber) 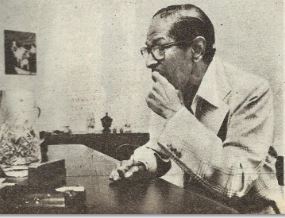 In March 1944, Oscar Alemán made a mysterious trip to New York. Mysterious, as I haven't been able to find info on the background of this trip. Was it a promotion effort, possibly sponsored by the Argentine devision of Odeon Records to market their recent and successful Latin artist in The Big Apple? Or was it merely Alemán's personal attempt at a breakthrough in the United States to follow up on the success in Argentina? No exact info about the decision and circumstances that gave rise to his trip to the United States seems to be available. Nevertheless, as stated in the short passage of an interview quoted above, he stayed 4 days in New York City. Alemán's problem, however, was that he had not got a license to work as a musician in the USA in advance of the trip. This meant that he could not perform in any of the music venues of the city, which had an agreement with the American Federation of Musicians, nor was he allowed to record without a license. Overall, the trip  seems to have depended on a wrong decision of time and place, as music business in the US in addition was in the middle of a strike launched by the American Federation of Musicians.

On August 1, 1942, the American Federation of Musicians (AMF) had started a strike against the major American recording companies because of disagreements over royalty payments.This meant that union organized musicians no longer were allowed to record for any record company, however, union musicians were allowed to participate on radio programs and other kinds of musical entertainment, but not in a recording session. The AMF recording ban was part of a struggle to get royalties from record sales for a union fund for organized out-of-work musicians. The union had previously opposed the recording of music, or “canned music”. The argument was that musicians were replaced with records in radio, and in cafes and bars bands were replaced with jukeboxes.

Record companies recorded as much music as they could in the run up to the strike and released this backlog through, but also resorted to re-releasing old recordings. Frank Sinatra and Bing Crosby were among the singers that had to release records without instrumental accompaniment (vocalists were not in the union as they were not considered musicians). One record company recorded and released Shakespeare’s Othello when they had no music to release. An exception to the strike was “victory discs” (V-Discs), which were recorded for US soldiers fighting in World War II and sent to them overseas. Another exception was some small speciality labels.

The strike stopped business between major record labels and musicians under contract with them. With recording and manufacturing equipment idle from the strike, enterprising music promoters, record distributors, and store owners with the right connections took the opportunity to start small specialty labels, such as Savoy (1942) and Apollo (1943–44), that catered to musicians who were not under contract. Sometimes musicians under contract restrictions recorded for them under pseudonyms. That business model worked in large urban markets such as New York, Chicago, and Los Angeles, where concentrated markets allowed a sufficient return from local distribution. Many of the historically important recordings of jazz and R&B from the mid-1940s originated from these small labels. Although not lucrative for musicians, these small labels gained them exposure that later led to contracts with more established labels.

Decca and Capitol gave into the AFM in 1943, RCA Victor and Columbia held out but eventually backed down in November 1944, and the recording ban ended. (info excerpted from Wikipedia, here, and another online source, here). 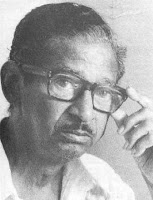 It was these circumstances that met Oscar Alemán when he arrived in New York March 1944. The mentioned record ban was still on and the demand of a six month residence before a musician's license card to work possibly would be allowed him made the situation rather unsecure and hopeless, as a foreign musician eventually would be considered a possible blackleg and a thread to the strike. However, Alemán stayed in NYC for 4 days and surprisingly managed to record a session on March 17, before he decided to return to Argentina! 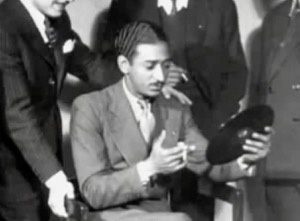 According to the online OA discography Hans Koert has listed two recordings by Alemán made on March 17, 1944 in NYC. No details about the label and personnel besides Alemán are available, just the matrix numbers and the title of the two tunes. Alemán's latest hit in Argentina was one of the recorded tunes, Bésame mucho (mx 71882), the other was Sweet Georgia Brown (mx 71883). However, these two recordings were unissued and remain an unsolved mystery.

I have not been able to point out a specific record label which may have made the recordings, any help from readers, discographers and collectors would be much appreciated. Unfortunately, I never had a chance to discuss this matter with Hans Koert, he may have had more info, at least from which source he had the knowledge of a record by Alemán made in NYC with added titles and mx-numbers. My friend and collector of the recently updated Alemán discograpy, 'Tito' Liber, forwarded the short passage of an interwiev with Alemán touching on the trip to the US, but he found no further info on the subject in Argentine sources.

So, to end this, I encourage anybody with more knowledge about this Alemán trip and the two recordings made in NYC on March 17, 1944 to respond to my request for further info. Contact me by using the e-mail stated below, or feel free to use the comment facility with this blog entry. Thanks in advance!

NB! This entry will also be posted at the Oscar Alemán blog.
---
Jo
keepitswinging.domain@gmail.com