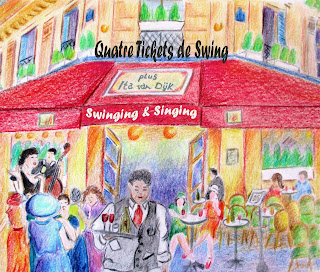 The Dutch jazzensemble Quatre Tickets de Swing has recently released their 3rd cd with a repertoire that reflects the atmosphere of the 1930s and 1940s popular music of the Parisian jazzscene.The quartet was founded in 1999 by Georg Lankester, who may be familar to readers of the keep(it)swinging blog as a contributor of well researched articles on famous European jazzmusicians of the swing era. 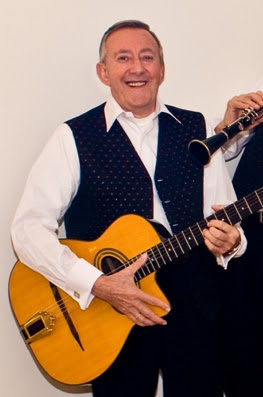 Georg Lankester is moreover an expert on everything concerning the Hot Club de France organisation and has specialized in the career of Django Reinhardt. This interest led him to found the Dutch branch of the HCF in 1983, and as a self taught guitarist Georg later formated the Quatre Tickets de Swing extending his passion for the music of Django and his time as an active part-time musician. The goal of the Quatre Tickets de Swing is to relive the atmosphere of the Hot Club swing by playing music that is sometimes cheerfully swinging, in other moments relaxed and melodius, but always executed with passion. The music is designed for both dancing, wining and dining as well as your casual listening enjoyment. The artwork of the front of the new CD expresses exactly the ambiance of the tradition that brought this branch of European swing to a success with the public: the Parisian café and cabaret with live music performance by an ensemble just like the Quatre Tickets de Swing. 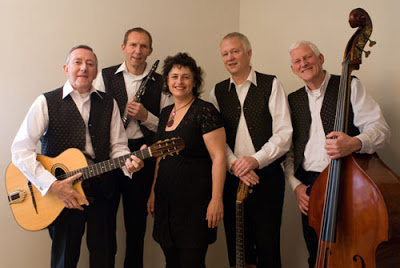 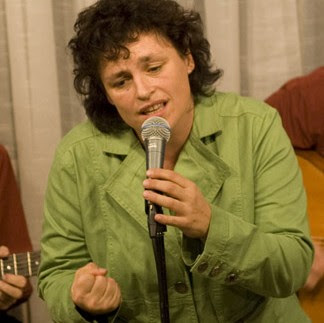 Ita van Dijk (voc)
On the new CD Ita van Dijk contributes with her pleasant singing on six tracks, five pieces from the 1930s Paris musichall and cabaret scene sung in perfect French: 'Chez moi' by Paul Misraki, the Jean Sablon hit 'Vous qui passez sans me voir', Charles Trenet's popular 'Ménilmontant', the musette classic 'Domino' by Louis Ferrari and Django and Grappelli's 'Larmes' (Tears); the popular swing classic 'Undecided' by Charles Shavers and with lyrics by S. Robin finally has Ita's singing in English. - The remain repertoire of the CD's 14 tracks are devoted to three famous instrumentals by Django Reinhardt: 'Manoir de mes rêves', 'Mélodie au Crépuscule' and 'Troublant Boléro', further 'Fleur de Lavande' by guitarist Fapy Lafertin and finally four standard swing classics from the
American book: 'You're driving me crazy', 'Body and Soul', 'Please be kind' and 'Sugar'. - Peter Swart has the lead voice on tenor sax or clarinet at the instrumental pieces, very well executed with a warm and melodius tone in all tunes -  his tenor sax playing on 'Body and Soul' stands out with a beutiful interpretation of the theme reflecting and inspired by the playing of Coleman Hawkins, who made the song a hit in 1939. Georg Lankester shares solo spots with Peter Swart's reeds on most tunes, his guitar solos are carefully designed and executed leaving space for pausing and improvisation keeping time with the solid manouche rhythm playing by Arthur Siero on second guitar and Eric van Buijsen's swinging double bass. 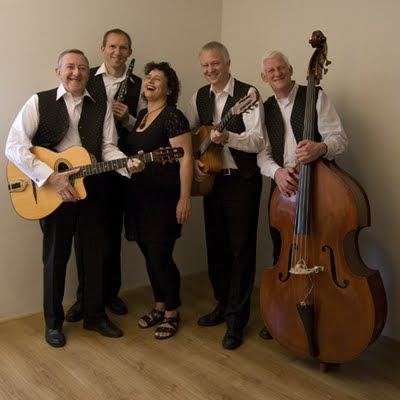 The new CD by Quatre Tickets de SWing with Ita van Dijk is thought as a promotion of the orchestra's live-performance and is available by contacting info@swing4all.nl - the ensemble can be booked at the website of Quatre Tickets de Swing.
Photos above: promotions material, CD artwork by Marina Lankester
Jo
keep(it)swinging.live 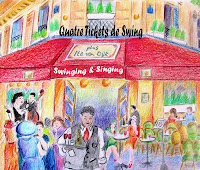 The new CD by the Dutch jazzensemble Quatre Tickets de Swing, entitled Swinging & Singing, presents a repertoire of pleasantly swinging standards made popular at the 1930s and 1940s Parisian jazzscene. Six tracks have the singing of vocalist Ita van Dijk, and the remaining tracks are famous instrumental compositions that relive the atmosphere of the European Swing Era, everything perfectly produced and designed for both dancing, wining and dining as well as your casual listening enjoyment.- The keep(it)swinging blog loves to inform you about issued items like the mentioned and generally covers jazz and related stuff released 1913-2013.
﻿