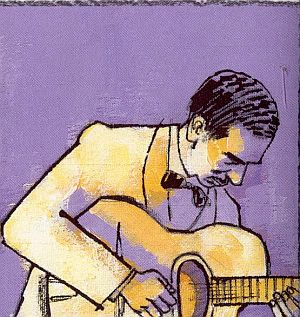 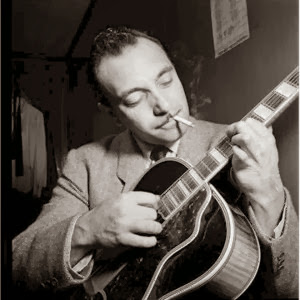 Guitar and Hammond B3 organ: a specific sonic palette
I want every listener to feel great when they listen to music. (Quote Tom Dempsey)
Hans Koert


Tom Dempsey, New York based guitar player, always carries the sound of those Jimmy Smith’s    B3  Hammond ….. I carry it with me everywhere I go .. with or without the guitar …  he says in an interview with Brent at the criticaljazz.com site. That music embodies a level of sophistication, integrity, honesty, humility, positivity, humanity, raw expression and an intent on bringing a good feeling to the world that is palpable.  When I was a kid, he remembers, the first record with a jazz guitar that fascinated me was the 1965 Verve album by the Wynton Kelly trio featuring Wes Montgomery at the guitar ….. This album led me on a musical journey, as Tom describes it at the liner notes, which introduced him to the organ played by Jimmy Smith, playing a duet with Wes Montgomery: The 1966 Verve Dynamic Duo album.  Dempsey says to have been inspired by guitarist like Wes Montgomery and Pat Martino, but also Charlie Christian, Kenny Burrell, Grant Green, Jim Hall, George Benson, Tal Farlow …… and a lot more.

Tom Dempsey (source: tomdempseymusic.com)
Since he moved to New York City, more than 20 years ago, he played with several organ players in clubs like Augie’s  and in several Harlem clubs down town. His latest album is entitled Saucy, wich refers to  …. my days playing regularly in Harlem with one specific organist who almost exclusively played in the key of G.  To this day G is one of my favorite keys on the guitar.

Enjoy this own composition  Saucy, which became the title song of this album,  in a fragment of a concert at the Columbia University, 2012 .


Tom Dempsey is accompanied by Ron Oswanski at the Hammond B3 organ and Alvin Atkinson on drums. Ron Oswanski debuted last summer with his album December’s song.

Tim Ferguson (not on the record)  and Tom Dempsey (source: tomdempseymusic.com)

His album Saucy contains ten tracks, half his own compositions – half standards.  Buddy Montgomery’s Bock to Bock ( Monk and Wes’ younger brother), Lee Morgan’s Ceora and the Simon and Carfunkel hit Bridge Over Troubled Water, which remembers him to the Katrina and Sandy hurricanes. Ceora, which debuted on Lee Morgan’s Blue Note album Cornbread ( September 1965), has always been one of my favorites, he says in the liner notes: The rhythmic background of the sounds of Brazil coupled with the sophisticated rhythms, melodic and harmonic attributes if be-bop and hard bop music make for a very interesting marriage of musical textures.

The album ends with Tom Dempsey’s Pat-a-tat-tat, an uptempo composition by Dempsey, written for Pat Martino, a jazz icon he admires … It belongs to my favorites of this album.
Hans Koert
editor
keepswinging@live.nl

The Tom Dempsey Trio has that specific sound of the jazz guitar in combination with the groovy sounds of the Hammond B3 organ .... a popular sonic palette.  Tom Dempsey's latest album, entitled Saucy, features Ron Oswanski at the Hammmond B3 organ  and Alvin Atkinson on drums. A great album to find a copy.

October 13th, 2013, one month ago,  a unique double concert in the Hot Club style had been scheduled.
The quartet of guitarist Fapy Lafertin with Lollo Meier did take place at a concert in Bathmen (near Deventer), invitated by Swing4all, which schedules a series of jazz concerts, entitled Jazz on a Sunday afternoon.

Quatre Tickets de Swing: f.l.t.r.: Eric Van Buijsen - Arthur Siero - Peter Swart and Georg Lankester (photo courtesy: Nic Gerretsen)
Quatre Tickets de Swing was invited as the  opening band. For a packed house, the group, completed by lady singer Ita Van Dijk, started the program. Quatre Tickets de Swing is a quartet that plays music in the gypsy swing tradition that creates the typical French atmosphere of the 1930s and 40s, bringing Django standards, including beautiful songs performed by Ita such as Ménilmontant and Domino.  These titles and more  can be found on its recent album Swinging & Singing.

After the break the well known Fapy Lafertin - Lollo Meier Quartet continued the concert. The quartet featured Fapy Lafertin and Lollo Meier solo guitar, Henri Schuler double bass and Bram Van Es rhythm guitar. This set could be best summarized up in a few words as a concert that offered the audience exciting improvisations by Fapy and Lollo in a virtuoso performance.

In the first set, the band played some Lollo Meier compositions, like Hondarribia as well as some well-known Django themes like Hungaria and Them There Eyes.

The second set  included titles like Are You In The Mood and Japanese Sandman as well as Fapy’s beautiful composition Plach’terida which surprised the audience. The latest album by the Fapy Lafertin-Lollo Meier Quartet is entitled Plach’terida
The final tune of the concert was entitled Les Yeux Noirs ( =Dark Eyes), which had an impressive intro by Fapy Lafertin .... a concert to remember!

A month ago a unique double concert was schedulded by Swing4all in its series Jazz on a Sunday afternoon in  Bathmen, a suburb of  Deventer (The Netherlands), October 13th, 2013, with the well known Fapy Lafertin - Lollo Meier Quartet. The hot club formation Quatre Tickets de Swing ( with vocals by Ita Van Dijk) opened the concert. Keep (it) Swinging loves to share a review of this unique memorial concert by guitarist Georg Lankester of the support band Quatre Tickets de Swing.