The xylophone is a musical instrument in the percussion family that consists of wooden bars struck by mallets. Here the term xylophone refers specifically to a chromatic instrument of somewhat higher pitch range and drier timbre than the marimba. Both the xylophone and the marimba, however, have wooden bars in common, while the vibraphone has metallic bars.

Red Norvo was one of jazz's early vibraphonists, who helped establish the xylophone, marimba and later the vibraphone as a viable jazz instruments. Norvo began his career 1925 in Chicago where he played in a band named The Collegians and at the same time joined many other bands, even an all-marimba band. At one point he was engaged by Paul Whiteman and later recorded with Frankie Trumbauer (1932) and Victor Young's orchestra (1933). In 1929, Norvo had recorded two sides under his own name for Brunswick, but they were unissued. His first issued session under his own name was recorded on April 8, 1933 in New York for Brunswick. Two self penned tunes were recorded, Knockin' On Wood and Hole In The Wall, issued on BR 6562 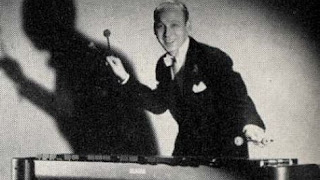 This session pleased Brunswick's recording director Jack Kapp and Norvo was booked for another session. This time, Kapp was out of town and Norvo went ahead and recorded two of the earliest, most modern pieces of chamber jazz yet recorded: Bix Beiderbecke's In a Mist and Norvo's own Dance of the Octopus. Playing marimba instead of xylophone in this session, Norvo was accompanied by Benny Goodman in a rare performance playing a bass clarinet, Dick McDonough on guitar and Artie Bernstein on double bass. Kapp was outraged when he heard the recordings and tore up Norvo's contract and threw him out. Nevertheless, this modern record remained in print all through the 1930s. - The recording of In A Mist and Dance Of The Octopus was made on November 21, 1933 in New York


Both tunes have been uploaded at YouTube and are inserted below, first In A Mist

And here is the remarkable Dance of the Octopus

Both tunes are semi-classical pieces and early examples of chamber jazz. The music is further a guide to Norvo's later career which spanned both swing, be bop and cool jazz - the experience from these early recordings opened the opportunity of experiement and supported Norvo's talent for adapting his chosen instrument the changing vogue in jazz. - A modern performance of Dance of the Octopus is inserted below to remind us that even experimental music can be fun when taken serious

Today the media have spread the sad news that the well known Belgian jazz musician Toots Thielemans passed away this morning at age 94. A career profile is available here , and the official website including bio and discography here.

Toots Thielemans was considered the world's foremost performer of the jazz harmonica, here he is in a concert performance in The Netherlands 2009 playing Bluesette on the mouth organ

Last month the jazz world commemorated the Centennial of pioneer of the modern jazz guitar Charlie Christian (July 29, 1916 – March 2, 1942). Christian was an important early performer on the electric guitar and is considered a key figure in the development of bebop and modern jazz. Many critics believe that he alone is the link between swing and modern jazz. 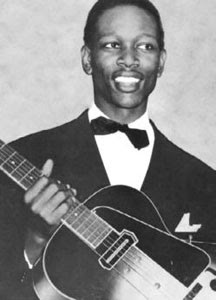 Charlie Christian was born in Bonham, Texas, but grew up in Oklahoma City. His father was a blind guitarist and singer, his two elder brothers, Edward and Clarence, were musicians, and at the age of twelve Charlie was playing on a guitar that he had made from a cigar box. He was actually first trained on the trumpet which later was a huge contribution to his fluid single-note guitar style. Then, his father and brothers formed a quartet and Charlie got a real guitar. When he grew up, he became a much-admired local musician in Oklahoma, playing an amplified acoustic guitar as early as 1937.
Word of Charlie's skill as a guitar player reached record producer John Hammond, who arranged for Christian to travel to Los Angeles in August 1939 for an audition with Benny Goodman.
At first Goodman was negative and against engaging Christian but changed his mind after having challenged the young guitarist in a version of the jazz standard Rose Room that went on and on. Goodman was deeply impressed by Christian's playing, engaged him and soon featured him on weekly radio broadcasts and in recordings.
Charlie was mainly featured with Benny Goodman's sextet and before the year was over he was a nationally prominent jazz soloist. Unfortunately his success was as brief as it was immediate. Charlie contracted tuberculosis in mid-1941 and died a few months later.
Christian was among the first jazz guitarists to amplify his instrument in order to match the volume of wind instruments, and he was clearly the most brilliant soloist of his time on electric guitar. He was emulated by many swing-style players, and his posthumous impact on younger be bop guitarists was enormous. He was a regular participant in the Harlem jam sesseions at Minton's at which some of the bop pioneers gathered - in this setting Charlie further developed his playing style.
Charlie Christian remains among the most creative soloists of the swing period, and his co-operate work with Goodman created compositions and memorable recordings that since have become standards in jazz. Below I'll insert some examples of Christian's recordings in order to commemorate his genius as a guitar player. 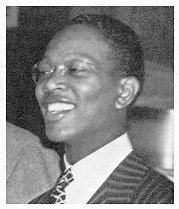 Charlie Christian was engaged by Goodman in August 1939 and the first studio recording in which he participated was made in New York October 2 for Columbia. Four sides were recorded featuring the BG sextet, two takes of Flying Home,  Rose Room and Stardust. Personnel are: Benny Goodman (cl), Lionel Hampton (vib), Fletcher Henderson (p), Charlie Christian (el g), Artie Bernstein (b) and Nick Fatool (dm). Already at this first recording date with BG Christian puts his personal imprint on the session displaying his mastery of both single string and chord solo technique as well as great improvisational skills.

One of the tunes that always will be associated with Charlie Christian and his collaboration with Benny Goodman and the sextet is Seven Come Eleven, first time studie recorded for Columbia November 29, 1939 by the same constellation as above.

Another great solo by Christian with the sextet is featured in Shivers, first time studio recorded for Columbia December 20, 1939, same personnel as previous sessions except Johnny Guarnieri (p) replaces Henderson

In the spring of 1940, Goodman reorganized his sextet, from now on a septet featuring Johnny Guarnieri  as regular pianist, but at some occasions replaced by Count Basie. Other new members were Georgie Auld (ts), Cootie Willims (tp) and Dave Tough (dm). One of the often heard and popular recordings by the septet featuring Charlie Christian is Air Mail Special

As mentioned above, towards the end of his all too short life Charlie Christian took part in jam sessions at Minton's, a Harlem club considered the birthplace of be bop and modern jazz. From these sessions recorded May 1941 by Jerry Newman, I'll insert a couple of examples to end this small presentation of Charlie Christian. Here is first a take of the swing standard Stompin' At The Savoy excelling Christian's marvellous improvisational skills

Honeysuckle Rose is a vehicle for more improvisational work by Christian, here re-named Up On Teddy's Hill

One of my all-time favorite jazz musicians is Joe Venuti, the father of jazz violin. Venuti's collaboration with Eddie Lang as a duo or together in various band combinations is thoroughly documented on records that remain indispensable examples of high quality jazz performance and should be available in the collection of any serious jazz connoisseur. Here is the Venuti-Lang duo in a precious sequence from the 1930 film King of Jazz performing Wild Cat

Following Eddie Lang's untimely death in March 1933, Venuti conducted a tour of Europe and the UK.  Upon returning to the US in 1935, he formed a big band and worked as its leader. Unfortunately, Venuti was less successful as a big band leader than as a soloist, and the band folded in 1943. After this period, Venuti transitioned from being in a position of relative prominence to one of ignominy. He moved to California in 1944 to become a studio musician with MGM, in addition to playing with other film and radio studios. He also appeared regularly on Bing Crosby's radio show during this time. Later, he returned to a small group format and continued to play and record in and around Los Angeles, while touring frequently. Throughout much of the 1950s Venuti made records and played at clubs. This was the beginning of about a 15-year lull in his career. In the early 1960s he was mostly inactive due to his development of alcoholism. The late 1960s, however, marked a revival in his career. During the 1970s, at the end of his life, Venuti toured extensively in Europe with a small ensemble. During this time he made his final recordings with names such as Earl Hines, George Barnes, Ross Tompkins, Dave McKenna, Marian McPartland, Scott Hamilton, Leon Redbone, and most notably Zoot Sims. Venuti continued to tour and play until his death in 1978 (excerpted info from Wikipedia, here)

Below I'll insert some examples of Joe Venuti live performance from his late career that have been saved and uploaded at YouTube. Here are first two examples from a live concert in Copenhagen 1969. Venuti is accompanied by the Newport All Stars: George Wein (p) Barney Kessel (g) Larry Ridley (b) Don Lamond (d)

As mentioned above, during the 1970s Venuti toured extensively in Europe and from one of his frequent visits to Italy, here is a saved TV performance featuring Joe Venuti with Pino Calvi's Orchestra in a Gershwin medley

In 1973, filmmaker Larry Stair made a short film titled Thank You, Joe Venuti which brings you into Joe Venuti's home, where you watch him fix himself a cup of instant coffee, sit down in his living room and then pick up his violin for some wonderful solo improvisations. He then drops in on the New Deal Rhythm Band for some swinging hot fiddle numbers. The film has been uploaded at YouTube and is inserted below in remembrance of a great artist - enjoy!