Some time ago I pointed you to two CDs by the Danish jazz guitarist Jacob Fischer recorded in New York for the Japanese label Venus Records in 2013 - you can still read the review here. Last year Jacob Fischer was back in New York to record again, this time for Arbors Records - a Florida situated company. The recordings were made in the Avartar studios in New York City and comprise material released earlier this year on the CD shown below, which is the second release by Arbors of Jacob Fischer recordings - the first was recorded in 2011 featuring fellow guitarist Bucky Pizzarelli a.o. and released in 2012 (- more info here).


The new CD by Jacob Fischer has twelve tracks and Fischer is accompanied by three American musicians: Chuck Redd on vibes, John Webber on double bass and Matt Wilson on drums. Jacob Fischer plays an acoustic-elctric Alhambra nylon-string flamenco guitar in all tracks, and the sound of the instrument together with Chuck Redd's vibes reminded me of an album in my collection featuring the Charlie Byrd Trio recorded in 1997 for Concord Jazz with the title 'Au Courant' (CCD 4779-2). The CD also featured Chuck Redd on vibes and the album remains one of my favorites by Charlie Byrd from this period.
Chuck Redd, who is also a drummer, joined Charlie Byrd in 1980 as a vibraphonist and the same year he also joined Great Guitars (Barney Kessel, Charlie Byrd and Herb Ellis) on drums. He was featured internationally on tours with the Barney Kessel Trio, Ken Peplowski, Terry Gibbs and Conte Candoli, and from 1991 until 1996 he was featured vibraphonist with the Mel Torme All-Star Jazz Quintet. He has toured and performed with Dizzy Gillespie, Mel Torme, Tommy Flanagan, Dick Hyman, Ray Brown, Monty Alexander, Laurindo Almeida, Tal Farlow, Red Norvo, Scott Hamilton, Mickey Roker and Frank Vignola. Further, Chuck Redd is featured on over 70 recordings and has released three CDs as a leader for Arbors, learn more at his official website, here
John Webber is a New York based double bass player, who leads his own trio named Bebop Generations. His primary inspiration as a bass player were Ray Brown and Paul Chambers, he has worked with musicians like Jimmy Scott, Lou Donaldson, Bill Hardman and Junior Cook, and he has been a regular bass player with Johnny Griffin and made records with Horace Silver and other musicians, learn more here
Matt Wilson is a New York based drummer,composer, bandleader, producer, and teaching artist. He leads his own Quartet and is an integral part of bands led by Joe Lovano, John Scofield, Charlie Haden, Lee Konitz, a.o.. He has performed with many legends of music including Herbie Hancock, Dewey Redman, Andrew Hill, Bobby Hutcherson, Elvis Costello, Cedar Walton, Kenny Barron, John Zorn, Marshall Allen, Wynton Marsalis, Michael Brecker, Pat Metheny, Bill Frisell and Hank Jones. Matt Wilson has further appeared on 250 CDs as a sideman and has released 9 as a leader. Learn more about his career at the official website, here
Jacob Fischer on guitar and Chuck Redd on vibes share solos on most tracks of the new CD from Abors, but both Webber and Wilson are also left solo space showing off their chops. The overall impression of the music is that the four musicians together create a consistent and very listenable output, the interplay between Fischer and Redd is excellent and the support by the two rhythm players is solid and sustains the lead solo players in an exemplary way. The repertoire chosen for the CD contains standards like Cole Porter's Love For Sale and Every Time We Say Goodbye in updated arrangements including a special intro in Love For Sale by Fischer's guitar using both harmonics and slide adding a true blues feeling to the tune. There is also a splendid arrangement of Irving Berlin's Putting On The Ritz and further great readings of modern standards like A Nightingale Sang In Berkely Square, Tenderly and Billy Strayhorn's Daydream. Oscar Pettiford's Laverne Walk marks the blues imprint, and Fischer's inspiration from Django Reinhardt is incorporated in the quartet's interpretation of Swing 42 and Fischer's own composition titled Napolitana. 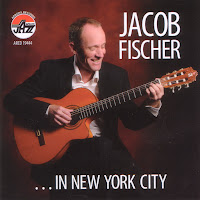 Jacob Fischer and his three fellow musicians have recorded a very listenable CD for Arbors that contributes well to the modern interpretation of swing, Fischer's solos and arrangements set him in the company of other estimated guitarists as a true artist who knows and acknowledges his roots, but who also has sufficient experience and gravity to fully convince the listener that he is himself as a guitarist. - The CD is highliy recommended and is available for purchase here and here
---
Jo
keepitswinging.domain@gmail.com

Ragtime had its heyday at the dawn of the 20th century, it was the popular music of the time and ragtime composers were busy and had success publishing new ragtime scores that were in great demand by performing musicians as well as amateurs looking for suitable sheet music for home entertainment. An example of a popular ragtime piece from the period is the shown A Ragtime Skedaddle by George Rosey ( - a pseudonym for George M. Rosenberg) that was published in 1899, the same year as Scott Joplin's Maple Leaf Rag. The sheet front subtitles the piece 'March and Cake Walk' pointing to the musical form and further to its proper use as accompaniment to performance of the cake walk, a popular social dance fad of the time.


If you take a closer look at the sheet front (- a free downloadable copy of the original piano score is available here), you can notice that the piece was available for purchase in various arrangements (se detail above). The standard score of course was designated for piano, but you had also the possibility to buy arrangements for banjo solo, full orchestra and various string band combinations featuring mandolin and guitar. Today ragtime is considered a musical genre performed by a solo piano player, but fact is that  when scores like A Ragtime Skedaddle were published, other instruments were just
as usual for performance of the music. 'The King of Banjo', Sylvester 'Vess' L. Ossman , recorded the piece the same year it was published and had success with his version as a banjo solo

Sylvester 'Vess' L. Ossman (1868 - 1923) was one of the first popular banjoists to make cylinders and records. Beginning with his first cylinder recording in 1893,  his fame was spread far and wide through his thousands of recordings of popular ragtime and marches. He performed extensively in England as well as the USA. Later in his career, he led his own dance bands in Ohio and Indiana. - A selection of Ossman's recordings is available in streaming audio here

A contemporary string ragtime trio from San Francisco has taken its name from George Rosey's popular piece and presents themselves as The Ragtime Skedaddlers.

The Ragtime Skedaddlers are Dennis Pash on banjo-mandolin, Nick Robinson on mandolin, and Mike Schwartz on guitar (formerly Dave Krinkel). They play rags, cakewalks, marches, waltzes, and latin-tinge pieces from vintage mandolin and guitar sheet music arrangements. The trio has released three full albums, all available in streaming audio and for purchase here. The latest is approbiately titled The Latest Popular Mandolin and Guitar Music and gives an excellent impression of the repertoire performed by the trio.
From a review of one of the albums by The Ragtime Skedaddlers (- accessible here) I like to quote the following:


"Using arrangements published during the ragtime era, the Ragtime Skedaddlers continue the tradition of ragtime string bands. (-) Unlike other “traditional” groups who take their inspiration from various notions of New Orleans jazz or Chicago jazz, the Skedaddlers go back to a time when string ragtime, light-hearted yet propulsive, was America’s true popular music.(-) This trio doesn’t speed up or approach the music with either clownish levity or undue scholarly seriousness. Rather, they are old-fashioned melodists, creating sweet lines that arch and tumble over one another in mid-air. (-) The Skedaddlers are entrancing on their own, and a delightful change from the often heavy ensembles so prevalent in occasions of this sort."

In this video recorded in 2010, Dave Krinkel on guitar was a member of the trio, he is also featured in the next, recorded at at private party in 2013 when The Ragtime Skedaddlers among other pieces also performed an excellent version of Ernesto Nazareth's maxixe titled Dengozo (published 1907)

To end this small presentation of The Ragtime Skedaddlers, here is the trio's performance of Henry Lodge's Temptation Rag recorded at the Mandolin Symposition earlier this year, Mike Schwartz is the featured guitarist in this video

When Begin the Beguine debuted in Cole Porter’s musical comedy Jubilee in 1935, it was the longest popular song ever written at 108 bars. The conventional length for a song is 32 bars. The beguine of the title refers to a dance that was developed on the islands of Martinique, Cuba, and Guadeloupe in the 1930s. It is similar to a rumba, but slower, with dance moves performed smoothly and deliberately. Like many Latin dances, the beguine emphasizes the ability to roll the hips to evoke sensuality while performing the steps. Cole Porter composed the song during a 1935 Pacific cruise and also wrote the lyrics, and in 1938 clarinetist and bandleader Artie Shaw recorded his instrumental version of the song, that became a hit of the swing era. - Here is a filmed performance of Begin The Beguine featuring Artie Shaw and his orchestra from 1938

Another instrumental version of Begin The Beguine among my favorites was recorded by Oscar Alemán y su Quinteto de Swing November 4, 1942

Cole Porter probably adopted the musical form 'beguine' either in Paris, France or at a visit to Martinique during his 1935 Pacific cruise. The musical form -  like the dance style - has its origins in the French Antilles (Martinique and Guadeloupe) and another example of a beguine adopted by a popular artist is Josephine Baker's 1932 version of the song Madiana composed by the Martinique vocalist Maïotte Almaby

This summer I have enjoed listening to several recordings of original creole music from Martinique, and to end this small entry on a popular song, I'll insert a couple of examples of this regional music that had success in Paris during the 1930s, 1940s and 1950s. At that time many musicians from Martinique were in Paris and made recordings that ought to be better known among jazz fans. One of the Martinique musicians, who made a career in Paris, was clarinetist Eugène Delouche (1909-1975). He led his own band of Martinique musicians called Del's Jazz Beguine, and in 1935 his ensemble recorded this beautiful song dedicated to Martinique

To end this, here's another recording by Del's Jazz Beguine - also from 1935, the title is Reverie