A Handful Of Keys - And More

According to info at the Red Hot Jazz website quoted here: "Fats Waller's big break occurred at a party given by George Gershwin in 1934, where he delighted the crowd with his piano playing and singing. An executive of Victor Records, who was at the party was so impressed that he arranged for Fats to record with the company. This arrangement would continue until Waller's death in 1943. Most of the records he made were released under the name of Fats Waller and his Rhythm. The group consisted of around half a dozen musicians who worked with him regularly, including Zutty Singleton. Throughout the 1930s and early 1940s Fats was a star of radio and nightclubs, and toured Europe. He unexpectedtly died on board a train near Kansas City, Missouri of pneumonia in 1943."

About Fats Waller and His Rhythm the following is also quoted from the Red Hot Jazz website:

"Between 1934 and 1942 the group recorded about 400 sides, well over half of Waller's lifetime recorded output. Material ranged from downright lamentable to outstanding and Waller's treatment of it ranged from brusque to brilliant. (-) The "Rhythm" was primarily a studio band, and recording dates had to be worked into the musicians' different schedules. Waller's genius carried the band, enabling them to record as many as ten sides in a single day, often consisting mainly of new material. Rarely did band members know in advance which tunes they would be recording! It is a testament to the collective musical talent of the group that they managed so well without rehearsal. This chaotic approach succeeded in part because of consistency in core personnel which included Waller, Autrey, Sedric and Casey. The chaos no doubt contributed to the spontaneity which characterizes many of the Rhythm's recordings." (Mike Donovan at Red Hot Jazz, here )

Paul Asaro is one of a chosen few contemporary piano players who has continued the stride piano style of Fats Waller convincingly, here's an example

In 2012, Rivermont Records released a CD featuring Paul Asaro that revitalizes the music originally recorded by Fats Waller and His Rhythm

Paul Asaro is accompanied by members of the Chicago based jazz ensmeble The Fat Babies - Andy Schumm (co), John Otto (cl,ts), Jake Sanders (g), Beau Sample (sb) and Alex Hall (dms), and the repertoire of the disc features both popular and lesser known tunes from the Fats Waller and His Rhythm's recorded output. There are forteen tracks at the CD, a tracklist is available here

The music at the disc is excellently performed by Paul Asaro and The Fat Babies, audio quality is top notch recreating the atmosphere of the Victor studio recordings by Fats waller and His Rhythm. I highly recommend the CD as a successful attempt to relive some of Fats Waller's recorded legacy convincingly without spoiling the original source. These cats know their stuff and carry on a heavy heritage. - Below is inserted some examples of live performance of some of the tunes presented at the CD. Here's Paul Asaro and The Fat Babies from a live performance earlier this year performing Blue Turning Grey Over You

From a live performance last year, here is Paul Asaro and The Fat Babies playing the lesser known I'll Dance At Your Wedding

To end this, from a live performance earlier this year Belive It, Beloved - My, My, My! Now here 'tis; Latch On!

Email ThisBlogThis!Share to TwitterShare to FacebookShare to Pinterest
Labels: Fats Waller and His Rhythm, Paul Asaro, The Fat Babies 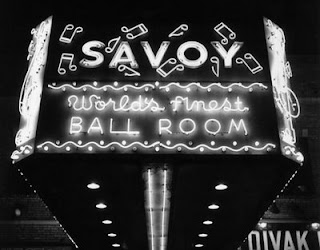 The Swing Era of the 1930s emerged with the rise of big bands in the USA. Harlem in NYC had opened the Savoy Ballroom late 1920s, it was the hot spot of the city for dancers to meet and have a great time, both coloured and white people were allowed to attend and dance to music by popular swing orchestras.

Harlem and the Savoy attracted dancers and an audience eager to find amusement, the house orchestra of the Savoy accordingly encouraged the public to Go Harlem

This great swing music was of course played by Chick Webb and his orchestra, Go Harlem was recorded June 2nd 1936
Chick Webb had come to NYC in 1925, he led bands in various clubs before settling in for long regular runs at the Savoy beginning in 1931. 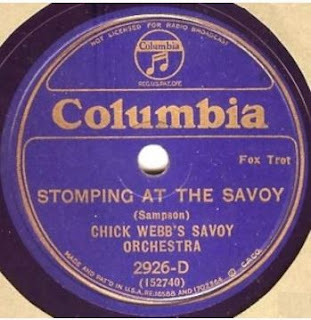 Chick Webb and his Savoy orchestra recorded the original version of Stompin' at the Savoy on May 18 1934, a swing tune composed and arranged by Edgar Sampson and since then a standard recorded by numerous other jazz artists

Chick Webb's big band was characterized by a crisp ensemble sound and the leader's disciplined, ferociously driving drum pyrotechnics and further a series of strong compositions and charts by Edgar Sampson. Although the orchestra did not become as influential and revered in the long run as some of its contemporaries, it nevertheless was feared in its time for its battles of the bands at the Savoy Ballroom. A famous encounter with the Benny Goodman orchestra at its peak (with Gene Krupa in the drummer's chair) left the latter band drained and defeated. 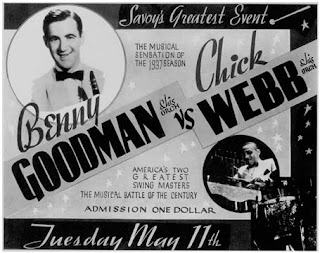 The Savoy often featured Battle of the Bands where Webb's orchestra would compete with other top bands from opposing bandstands. By the end of the night's battles the dancers seemed always to have voted Chick's band as the best. As a result, Webb was deemed the most worthy recipient to be crowned the first King of Swing. 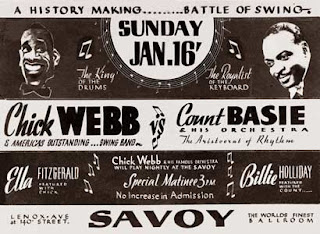 Although a judge declared Webb's band the official winner in 1938 over Count Basie's, and Basie himself said he was just relieved to come away from the contest without embarrassing himself, surviving musicians continued to dispute the ruling for decades to follow.
Chick Webb became one of the most competitive drummers and bandleaders of the big band era, his playing technique at the drumset later inspired Buddy Rich and  Louie Bellson. Below I'll insert a couple of examples featuring great work at the drumset by Chick Webb. - Here is the Chick Webb orchestra's recording of Clap Hands, Here Comes Charley from March 23 1937

Next follows Chick Webb and his orchestra with their version of Liza, recorded May 1938; the drum solo introducing the well known standard is said to be the leader's "answer" to Gene Krupa's contributions to the Benny Goodman orchestra's famous version of Sing, Sing, Sing

In 1935, Chick Webb hired the teenaged Ella Fitzgerald after she won a talent contest, he became her legal guardian and rebuilt his show around the singer. 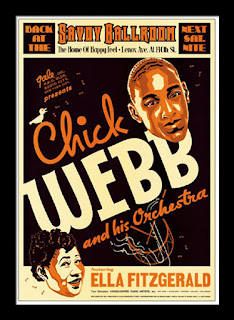 In 1938, Chick Webb's orchestra featuring Ella Fitzgerald as solo vocalist had a big hit with the tune A Tisket-A-Tasket, and this was followed by another hit in 1939 with a recording of Undecided

Sadly, Chick Webb died from spinal tuberculosis on June 16, 1939. After his death, Ella Fitzgerald led the Chick Webb band until she left to focus on her solo career in 1942 and caused the band to disband. 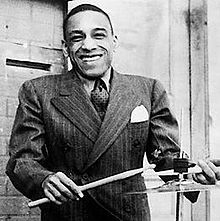 Chick Webb and his orchestra's contributions to great big band jazz of the Swing Era will remain, although his band did not become as influential and revered in the long run as some of its contemporaries. Nevertheless, the inserted audio examples above are proof that Chick Webb's band provided us with excellent swing of lasting quality, I think.
---
Jo
keepitswinging.domain@gmail.com