Recently I found out that the incomparable troubadour and pre-World War II ragtime, jazz, blues and Vaudeville stylist Leon Redbone has retired from both public appearances and recording last year. The official website, however, does not give many details of the reason for his retirement, but only states "(...) that his health has been a matter of concern for some time.  It has become too challenging for him to continue the full range of professional activities.". The music scene has indeed become poorer since this official announcement of Leon Redbone's retirement hit the news. Fortunately, we still have access to his records (- approximately fifteen single releases on LP and/or CD), further there are uploaded many recordings of live-performances at YouTube to fill in the missing of new releases and concert performances. - Below I'll focus on Leon Redbone's latest - and last - studio recording, the CD titled Flying By released in January 2014. 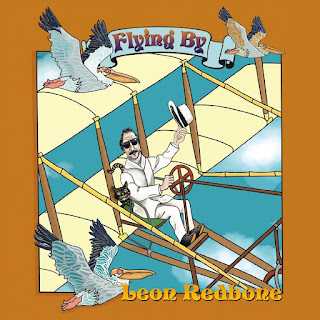 The Flying By CD was released after a hiatus of thirteen years when no new studio recordings were made, the previous studio recorded CD by Leon Redbone was Any Time from 2001. In the interim, however, a couple of CDs featuring live performances from the 1980s and 1990s were released. Asked about the reason for this long pause in his recording career, Leon Redbone answered the question in an interview  by simply stating “Things take time.” The answer indicates the seriousness and carefulness of a true artist, the material and conditions for the recording of a new studio album
are not a haphazard affair but rely on the right moment and the perfect setting. According to the mentioned interview the actual recording of the CD further met practical obstacles and had to use more studio locations before the material was ready for release in January 2014. - The CD has a rather short playing time (c.35 min.) and contains twelve tracks. Leon Redbone is featured as a vocalist on all tracks, he accompanies himself on acoustic guitar but is also supported by a small combo featuring clarinet, cornet, piano and rhythm in several tracks and two tracks have accompaniment by Vince Giordano and The Nighthawks big band. Mr. Redbone's regular pianist is Paul Asaro, who participates in all tracks. The material chosen for the CD is eclectic, several of the recorded tunes do not belong to the often heard songs even if you are collector of pre-WW II jazz, blues and sentimental recordings.Firstly, there are two songs originally recorded by female vocalist Lee Morse  for Columbia in 1928, 'Just You And I' and 'Main Street', and Leon Redbone explains the reason for this choice in the mentioned interview, quote "She was a unique individual - everything about her was unique, ... you hear [a Morse] recording one time and it stays with you." 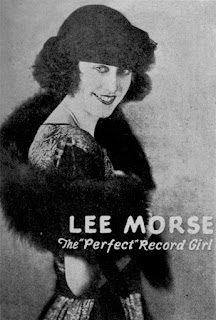 Just You And I opens the CD, the audio of this as well as the other tracks on the CD has been uploaded at YouTube, here.  Below is inserted Leon Redbone's version of the tune, and if you like to hear the original recording by Lee Morse, it's available here

According to the mentioned interview, band leader of The Nighthawks big band, Vince Giordano, wanted to cut a version of the tune Wanna Go Back Again Blues with Redbone singing the lyrics in an arrangement similar to a recording made by Duke Ellington and his Orchestra in 1926 for Gennett, available here 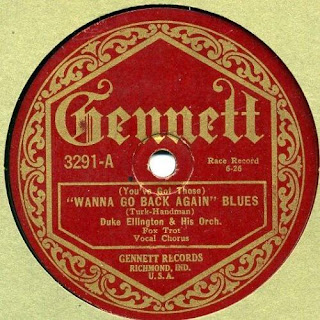 Also featured are Leon Redbone's version of Jelly Roll Morton's Mr Jelly Lord with the lyrics known from the famous Library of Congress 1938 recordings, sentimental Tin Pan Alley tunes like Baby Won't You Please Come Home (Marion Harris, Bessie Smith and McKinney's Cotton Pickers a.o. recorded this), the Isham Jones 1924 hit I'll See You In My Dreams, Get Out Get Under The Moon ( recorded by Anette Hanshaw a.o.), Save Your Sorrow (Gene Austin a.o. had a hit with this) and the CD ends with a seldom heard or recorded song composed by Irving Berlin But Where Are You. The song was originally sung In the 1936 Fred Astaire-Ginger Rogers movie classic Follow the Fleet by Harriet Hilliard - you can hear it and watch Harriet Hilliard singing the song in the movie here  - Here is Leon Redbone's version accompanied by pianist Paul Asaro and violin

There seems to be a preponderance of sentimental songs on the CD, and according to the mentioned interview with Mr. Redbone there is a good reason for that, quote: "Sentimentality in music, suggests Redbone, has “evaporated". It’s just noise volume level, with no sentimentality at all,” he says of contemporary music. “It didn’t get better over the years, which is unfortunate. Maybe a slight jog in the planets might make it get better!" It's my impression that Leon Redbone has put down his foot in a satisfactory way to achieve a slight jog in the planet Earth with the Flying By CD release. I highly recommend it to other fans of the great man as well as newcomers. The CD is available for purchase here.

The name of Joe Sodja does not pop up frequently nor is easily found in the usual reference books and articles about jazz or popular performers, and the info found on the internet only provides fragmentary details about his career. However, below I'll refer what I found available about Joe Sodja - a remarkable, but forgotten musician and entertainer.
This inserted photo of Joe Sodja is a still shot from a Vitaphone (soundie) film featuring Fred Rich and his orchestra recorded in 1938. Joe Sodja performs as a guest appearance at the end of the film playing a version of Chinatown, My Chinatown accompanied by Fred Rich's band.
The Vitaphone soundie has been uploaded at YouTube and is inserted below, Joe Sodja performs Chinatown, My Chinatown starting at 8:19

Joe Sodja's performance in the Vitaphone film shows his extraordinary dexterity as a guitarist combined with a humorous attitude appealing to a wide audience expecting to be entertained. This stage appearance seems to have been a successfull choice, although his attitude may seem outdated nowadays. Nevertheless, Joe Sodja had success and spent most of his career as a professional performer in the popular field of entertainment business. But in 1937 he also had a short stint in a regular jazz setting, when he had the opportunity to record a session under his own name for the Variety label as Joe Sodja's Swingtette accompanied by some top notch jazz artists of the time: Joe Marsala (cl), Frank Froeba (p), Artie Shapiro (b) and George Wettling (d). The session was recorded in New York on June 18, 1937 and four sides were cut, but only two of them were issued. The discographical info is inserted below
This session by Joe Sodja is the only registered jazz session during his career, moreover the recording of Limehouse Blues is the only tune from the session that has been reissued. It was reissued in the 1970s on a double LP by Columbia Records titled 50 Years of Jazz Guitar featuring various artists.

Joe Sodja's guitar playing in this swinging version of Limehouse Blues is quite intriguing and remarkable. His approach does not resemble the commonly applied technique by any of his well known contemporary American fellow guitarists. His guitar solo style has been compared with Django Reinhardt's because of the use of fast and long solo runs up and down the fretboard especially well known from Reinhardt's 'manouche' approach to the guitar soloist's opportunities. Sodja's right hand picking technique seems to have been transferred from a mandolin or banjo approach, which incidentally seems likely, since he also knew and played these string instruments. When not playing solo, his approach to comping also resembles Reinhardt's style - very unusual for an American guitarist at the time.
Joe Sodja was from Cleveland, where he was born in 1911 in a family with Slovenian roots. He had four brothers with whom he formed a band, The Arcadian Melody Pilots, that performed locally playing polkas and waltzes at dance hall gigs and was featured on local radio networks. At that time his great idol and inspiration was Harry Reser, the famous tenor banjo player and bandleader, and he concentrated on learning and refining his banjo playing technique. At age 16 he was discovered by talent scout and bandleader Paul Ash, who had a longer stint at a theatre in Cleveland with his orchestra. Sodja was invited to perform with the orchestra as a soloist, and after this engagement he became a popular solo attraction on the radio, first locally but in the early 1930s he was discovered and hired by bandleader Fred Waring, who had his own programs featuring his orchestra and invited guest on the NBC radio that reached all regions of the US. His engagement with NBC and Fred Waring brought Sodja to New York where he was a regular featured artist in Waring's programs during the 1930s. He also toured as a soloist on the national night club and conventional circuit performing light entertainment music besides appearing in various TV shows from the late 1940s and on. From about 1946 Sodja started a collaboration with pianist and bandleader Julian Gould with whom he recorded 150 transcriptions for Langworth during the following ten years in a trio setting labeled as the Joe Sodja Trio.
The Langworth transcriptions by the Joe Sodja Trio - like similar recordings by other artists -  were not commercially issued but were strictly decided for radio broadcast only. As far as I know, none of these transcriptions by the Joe Sodja Trio have since been reissued on LP or CD, but a couple of examples are available at YouTube. - Here is first Joe Sodja Trio performing Guitar Boogie

Sodja's guitar solo in this version of Guitar Boogie shows his inspiration from Les Paul, who had a hit with his version of the tune in 1947. The interplay with Gould's piano is excellent and the result is a swinging take that withstand repeated listening, I think. The same applies to the recording by the trio of a version of Exactly Like You from the Langworth transriptions

Sodja's collaboration with Julian Gould also included a recording of a LP that featured Sodja playing tenor banjo
The audio from this LP has been uploaded at YouTube, here's an example of the duo's playing in the honky tonk style

In 1957 Joe Sodja was hired to participate in a low-budget Hollywood Western movie titled The Parson and the Outlaw where he had a small role as a newspaper agent, moreover he composed and recorded the soundtrack music for the movie showing off his banjo playing
The movie was a success and was followed by a couple more in the same genre, Sodja again was offered small roles and participated in the screen play. About the same time there was recorded a couple of solo performances on screen featuring Joe Sodja showing off his capacity as a guitar player. To end this presentation of a remarkable musician and entertainer, here is Joe Sodja playing his version of The Old Mill Stream