Just A Little While To Stay Here

Enjoy some great music as played by one of my all time favorite jazz duos - clarinetist Billy Novick and guitarist Guy Van Duser. Here is first the duo's interpretation of an old New Orleans spiritual recorded earlier this year 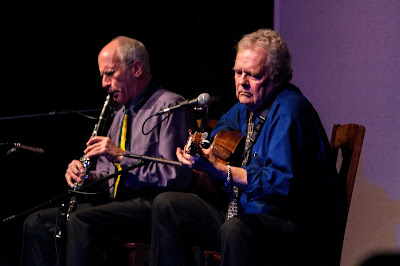 Billy Novick and Guy Van Duser have played and performed together for more than 40 years, the mutual understanding of what swing is all about always shines through in the duo's performances

To end this, here is the duo's excellent version of Stardust

Taking their name from a show written by Noble Sissle and Eubie Blake, a small group led by Don Redman recorded in the late '20s as the Chocolate Dandies. Redman also used the name for some McKinney's Cotton Pickers record dates. During the early '30s the name was picked up by other musicians, notably Benny Carter, who used it for a string of recordings he made with Coleman Hawkins, among others. Carter revived the name in 1940, again with Hawkins recording some small group jazz sides. - Below I'll insert some examples of recordings made by the various Chocolate Dandies studio ensembles.

Benny Carter was featured with Coleman Hawkins in a session for Commodore May 25, 1940 and recorded three titles under the name of Coleman Hawkins and The Chocolate Dandies. Recorded titles included Smack!, I Surrender Dear and I Can't Believe That You're In Love With Me. Participating musicians were Benny Carter (as,p), Roy Eldridge (tp), Coleman Hawkins (ts), Bernard Addison (g), John Kirby (sb), Sidney Catlett (dm)

Joe Pass (1929 - 1994) is generally considered to be one of the greatest jazz guitarists of the 20th century. His sophisticated style of chord-melody, with an outstanding knowledge of chord inversions and progressions, extensive use of walking basslines, and melodic counterpoint during improvisation, opened up new possibilities for the jazz guitar and had a profound influence on later guitarists. 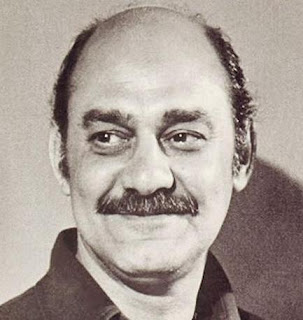 In addition to his ensemble performances, Joe Pass is regarded as an influential solo guitarist. His solo style was marked by an advanced linear technique, sophisticated harmonic sense, counterpoint between improvised lead lines, bass figures and chords, spontaneous modulations, and transitions from fast tempos to rubato passages. He would regularly add what he called "color tones" to his compositions, to give what he believed was a more sophisticated and "funkier" sound. He would often use melodic counterpoint during improvisation, move lines and chords chromatically or play melodies by solely shifting chords, and descending augmented arpeggios at the end of phrases. - As Pass made the transition from ensemble to solo guitar performance, he preferred to abandon the pick altogether, and play fingerstyle. He found this enabled him to execute his harmonic concepts more effectively. (info excerpted from Wikipedia, here)
Joe Pass recorded four studio albums of solo jazz guitar with the title Virtuoso for Norman Granz's Pablo label during the 1970s, these recordings are considered essential in demonstration of Pass' solo style. However, aside from studio recordings there were also released some live recordings of Pass' solo performances by the Pablo label, among them were the shown Live at the Montreux Jazz Festival 1975 recorded during two concerts on July 17 and 18. The LP issue was reissued on CD 1997 by OJC and is still available for purchase, here 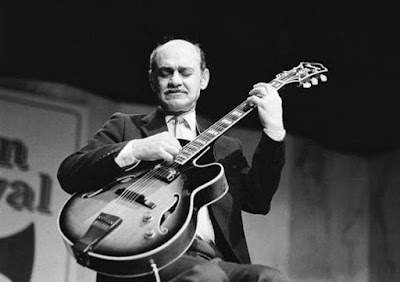 There are eleven tracks from the solo live performance of Joe Pass at the Montreux Jazz Festival 1975 on the CD, mostly standards but also three Pass compositions (info, here). The performance at the two concerts July 17 and 18 was also recorded on video, below I'll insert a couple of examples uploaded at You Tube. Here is first Joe Pass performing Stevie Wonder's popular tune You Are the Sunshine of My Life

Lawrence "Bud" Freeman (1906 - 1991)  was one of the most influential and important jazz tenor saxophonists of the Swing era. His smooth and full tenor sax style with a heavy robust swing was the only strong alternative to Coleman Hawkins' harder toned approach, until the arrival of Lester Young whom Freeman had allegedly influenced. 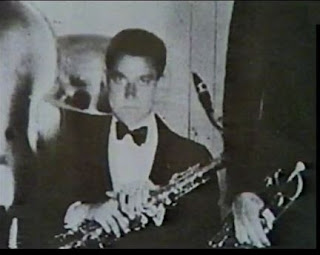 One of the original members of the Austin High School Gang which began in 1922, Freeman played the C-melody saxophone alongside his other band members such as Jimmy McPartland and Frank Teschemacher before switching to tenor saxophone two years later. Influenced by artists like the New Orleans Rhythm Kings and Louis Armstrong, they would begin to formulate their own style, becoming part of the emerging Chicago Style of jazz. 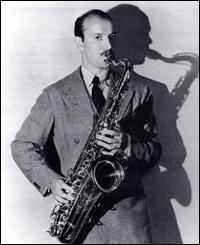 In 1927, he moved to New York, where he worked as a session musician and band member with Red Nichols, Roger Wolfe Kahn, Ben Pollack, Joe Venuti, among others. He then played with Tommy Dorsey's Orchestra (1936-1938) as well as for a short time Benny Goodman's band in 1938 before forming his own band, the Summa Cum Laude Orchestra (1939-1940). Freeman joined the US Army during World War II and headed a US Army band. After the war, he returned to New York and led his own groups and kept a close tie to Eddie Condon as well as working with the likes of Buck Clayton, Ruby Braff, Vic Dickenson and Jo Jones. He was a member of the World's Greatest Jazz Band between 1969 and 1970 and on occasionally there after. In 1974, he would move to England where he made numerous recordings and performances there and in Europe. Returning to Chicago in 1980, he continued to work into his eighties. - (info excerpted from this source, here) 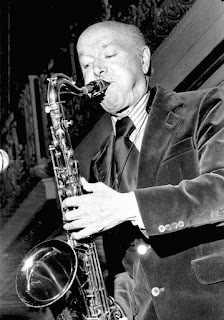 In 1938, Bud Freeman formed a trio with Jess Stacy (p) and George Wettling (d), which recorded some hot swinging sides for Commodore in New York - among the recorded titles were I Got Rhythm

To end this small presentation of some recorded highlights by Bud Freeman as a bandleader, I like to point you to a live recording featuring Art Hodes (p) and rhythm with Bud Freeman from the TV program Jazz Alley - the program is in two parts

And here is part two of the Jazz Alley performance