Georg Lankester continues and concludes his essay on the first International Jazz Festival of 22 to 28 February 1948, Nice (France). First part of Lankester's essay is accesible here. The text is in Dutch, a translation into English is to be published later. 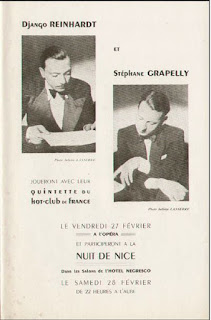 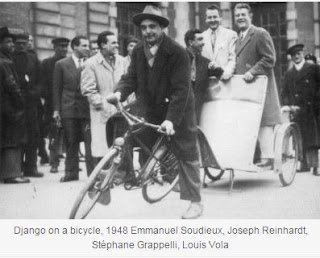 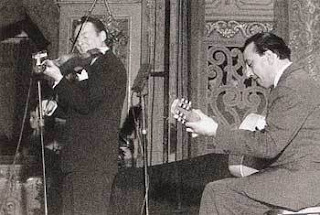 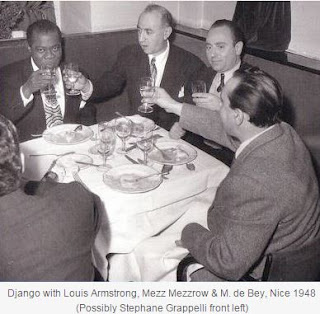 The Nice Jazz Festival was founded by Hugues Panassié and lasted from the 22 to 28 February 1948. It featured a repertory of traditional jazz, swing, and bop music and was the first international jazz festival. Georg Lankester writes an extended essay about the festival. The text is in Dutch, below follows the first part of the essay, the second part will be published later as well as a translation into English.

Mandolin orchestras were very popular in the early 20th Century and were commonplace in many towns and cities, even several schools had one. The stimulus to create mandolin groups often came from travelling mandolinists and teachers. Immigration from Europe to other parts of the world resulted in the concept spreading rapidly, with movements beginning quite early in America, Japan and Australia. An example of such a mandolin orchestra is the Candian Upper York Mandolin Orquestra, shown at the photo above.

The Upper York Mandolin Orchestra was founded in 1909 by Thomas Dooley, who was an Irish immigrant with a passion for mandolin orchestra music. Dooley met many  musicians interested in being a part of the orchestra, so he set up weekly sessions in his home, often going through the night and into the morning. It wasn't too long before these informal sessions would turn into concert performances throughout the province of Ontario. His son, Thomas Dooley Jr., also joined the orchestra and continued the directorship after his father passed away in 1956. With the birth of rock and roll, membership decreased drastically, but Dooley Jr. wouldn't let the orchestra cease. Eventually, the orchestra performances became infrequent but always well attended by mandolin orchestra enthusiasts. After the death of Dooley Jr. in 1979, the orchestra took a 16 year hiatus. In 1995, however, Thomas Dooley's youngest son   decided to recreate his grandfather's legacy and the Upper York Mandolin Orchestra was reborn and is still active today under the directorship of Thomas Dooley III. (- info excerpted from the web of UYMO, unfortunately no longer accessible).

Canadian mandolinist and long time fan of the mandolin orchestra tradition, Kevin Breit met with Dooley in 2009 to discuss a possible collaborative project. This proposal led to the successful recording of a CD titled 'Field Recording', released 2013 and containing material composed and performed by Kevin Breit accompanied by the Upper York Mandolin Orchestra (- you may listen to this collaborative work in streaming audio at Bandcamp, here). Kevin Breit and the UYMO continue the collaboration on the just released 2-CD set,'Ernesto and Delilah', shown below

The double CD set contains two distinctly different albums, the 'Ernesto' disc is instrumental and features arrangements of Brazilian composer Ernesto Ciari's works by the UYMO and Kevin Breit. The 'Delilah' disc is a folk roots album of songs written by Kevin Breit and performed with vocalist and actress Rebecca Jenkins accompanied by the UYMO. The instrumental disc contains eleven works by the mysterious composer Ernesto Ciari and is certainly the most interesting in my point of view, as this is a first time recording of the compositions by Ciari.

Some info about Ernesto Ciari is quoted here, excerpted from the website of UYMO (- no longer accessible):

Ernesto Ciari (1938-1972) was born in Rio de Janeiro. His father, Romero, was a doctor, an educated man of Portuguese extraction, an author, an amateur astronomer and musician. Ernesto was attracted to music, but had no formal training. After a few abortive harmony lessons, he immersed himself in music by illicit observation from the top of the stairs of the regular musical evenings at his house arranged by his father. He learned himself to play the piano, the guitar and the mandolin. When his father died suddenly in 1948, he earned a living for his family by playing in cinema and theatre orchestras in Rio. - Around 1958, Ciari started explorations of Brazil's "dark interior", absorbing the native Brazilian musical culture. After this period, he gave up any idea of conventional training and instead absorbed the musical influences of Brazil's indigenous cultures. His earliest compositions were the result of improvisations on the piano and mandolin. - Ciari played with many local Brazilian street-music bands; he was also influenced by the cinema and Ernesto Nazareth's improvised tangos. For a time, he became a mandolinist in a Rio opera company, and his early compositions include attempts at Grand Opera. Encouraged by Arthur Napaleo, a pianist and music publisher, he decided to focus his attention fully on composition. Plagued with deep depression, he would disappear for weeks without any contact with his family and friends and would eventually reappear, as if he had stepped out for a stroll around the block. Ciari's writing was sporadic but at the same time focused and intense. - Ernesto Ciari is largely unknown and the tragic circumstances of his death loom larger than his creative output. Ernesto took his life on what would be the premier of his most ambitious work, "O Círculo da vida".

The eleven featured compositions by Ciari at the 'Ernesto' CD are arranged by Thomas Dooley III for mandolin orchestra and have Kevin Breit as guest performer together with Cyro Baptista on percussion and Gregoire Maret on harmonica. The music is a strange mixture of different influences from Brazilian popular music, classical tradition and other fields difficult to identify. The rhythmic pulse of the music, however, sounds more American than Brazilian compared to what is usually performed in Brazil. Nevertheless, a fascinating soundscape is created at the disc and the complex music is well performed by the UYMO and Kevin Breit directed by Thomas Dooley III.

You have the opportunity to listen to (- and buy) the 'Ernesto and Delilah' double cd-set at Bandcamp, here. - The CDs including other recordings by Kevin Breit are also available for purchase at his official website, here.

Oscar Alemán teamed with Brazilian guitarist Gastón Bueno Lobo c.1925, they formed a duo that was named Os Lobos (- indicating G.B. Lobo's primacy of the duo), later the Portuguese word was changed into Les Loups.The duo had its professional debut in Rio de Janeiro 1926 (- more info, here), they were billed as Hawaiian guitarists and were featured in various performances together with other artists at different venues and even were presented in a live radio program. The debut of the duo was a success with the Carioca public and was followed by a short tour of Brazil early 1927. Later that year Les Loups were brought to Buenos Aires after joining Argentinian comedian Pablo Palitos, who introduced the duo in Buenos Aires and helped arranging exposure of Les Loups. The duo performed in various venues in Buenos Aires, was presented in radio and finally had the important luck of signing a recording contract with the prestigious Victor label. From December 1927 to December 1928 Les Loups recorded 16 sides for Victor as a duo and featuring violinist Elvino Vardaro as Trio Victor they recorded 8 sides more in this formation from September 1928 to January 1929 (- discographical details are available at Hans Koert's indispensable online discography, here).

The 16 duet recordings of Les Loups for Victor are the debut on record of Oscar Alemán, but this chapter of Alemán's career has mostly been neglected by critics and historians, who have engaged in Alemán's career and recorded output. Critics still seem to categorize Alemán as just another jazz guitarist and a clone of the Django Reinhardt 'school' of swing. But this was not the way it started, as Les Loups performed as Hawaiian guitarists and took advantage of the 'Hawaiian' hype that swept the world in the early decades of the last century.

The musical repertoire of Les Loups comprised tangos, waltzes and a few fox-trots performed in the 'Hawaiian' way, which means that the melody is played using a slide or steel bar by the lead guitarist while the other guitarist provides elaborate accompaniment using the insturment in a conventional way playing chords, fill ins etc. and supporting the rhythm. G.B. Lobo had the leading role playing the melody with a steel bar while Alemán provided supporting accompaniment. The Victor recordings by the duo are magnificent examples of a great teamwork and interplay between the two guitarists, and it's a shame that these recordings never have been re-issued - maybe that's a part of the background for neglecting this division of Alemán's recorded output by most critics?

Among the recorded tunes by Les Loups the famous tango 'La Cumparsita' (- recorded August 1928) had its debut on record in the version by the duo. Another famous, early tango was 'Guitarra que llora' that was composed by G.B. Lobo (- and elaborated in partnership with Alemán). This tango was recorded by Les Loups c. May 2nd 1928 and issued on a Victor 78' rpm disc (Victor 80839, mx BAVE- 44058A-2)

This was the initial recording of 'Guitarra que llora', but other artists also recorded this tango by G.B. Lobo and Oscar Alemán after it had added lyrics by Enrique Cadícamo and was published as sheet music

A contemporary of Les Loups was tango singer Augustin Magaldi, who recorded his vocal version of 'Guitarra que llora' for Victor shortly after the initial recording by Les Loups.

It has earlier been assumed by tango discographers that Magaldi's recording of 'Guitarra que llora' had featured Les Loups as accompanying guitarists, as the recording was made on a date when Les Loups also happend to be in Victor's studio in Buenos Aires (August 25th, 1928), but this assumption cannot be confirmed neither by audible review nor by available info in Victor's files (- a discussion regarding this a.o. is available here). Most likely the accompanying guitarists with Magaldi's vocal are his regular accompanying guitarists in 1928, Diego Centeno and Ángel Domingo Riverol. Anyway, here's Magaldi's version of 'Guitarra que llora'

By coincidence I found a recently recorded version of 'Guitarra que llora' uploaded at YouTube and performed by a Belgian trio named Les guitares magiques. This contemporary version revisits the original version by Les Loups and is a magnificent re-take of the tune that generates a hope for more from this talented Belgian trio. It's a sheer joy to learn that contemporary musicians finally have experienced the lasting quality of the music originally recorded by Les Loups.

I have not much info about Les guitares magiques, but here are a few details extracted from the info added with another uploaded video by the trio: "Slide masters Raf “Lazy Horse” Timmermans and Gijs Hollebosch usually accompany singer-songwriters. They met in early 2012 and gigged together a few times. Soon it became clear they had to share their passion for slide music. Digging deep into the Hawaiian style of playing slide guitar, Raf and Gijs soon discovered a whole unexplored world of forgotten music. Together with double bass player René Stock they built a new repertoire. It is Hawaiian, but it is also much more."