Lammy Bruyns is an acknowledged accordionist in Holland known for her virtuosity in the Parisian Musette music as well as for her singing. About five years ago Lammy met Georg Lankester, guitarist in the gypsy-swing style, who had published a book about Django Reinhardt’s influence on the Musette-rhythm. During their first meeting Lammy, Georg and some friends spontaneously played a bit together and then Lammy suggested to form a combo. The Lammy Bruyns Combo is a quartet consisting of Lammy Bruyns (accordion and vocal), Georg Lankester ((solo) guitar), Arthur Siero (guitar) and Jan Miedendorp de Bie (double bass). The repertoire of this quartet includes original Musette waltzes, (music in which Lammy is an expert) - and all these backed up in a highly swinging rhythm like it was played in the 1930s and 1940s' Paris. Moreover some American popular songs are added as well as famous French chansons and own compositions.
In October 2017 the combo gave a concert in the Northern part of Holland which was recorded for an enthousiastic audience. From this concert a selection of the recordings was chosen in order to present a variety of the repertoire by the Lammy Bruyns Combo in a just released CD, shown above. The CD includes original French Musette waltzes, some ballads as well as examples of Django swing from the 1930s and 1940s. Tracklist: Style Musette / September Song / Indifférence / It had to be you / Vous et Moi / Lady be Good / Ma première Guitare / Mr. Sandman / Pour Jo / Chez Jacquet / You made me love you / Les yeux noirs. - A couple of audio clippings from the CD are inserted in the video below

Next to live performances in Holland – starting from 2017 – the Combo also gives concerts in Germany.
The music of the Lammy Bruyns Combo with a French touch will bring listeners back to the Parisian cabarets of the 1930s and 1940s and certainly invites to dancing as well as a cozy atmosphere in good company.

For any information, send an e-mail to:  georglankester@gmail.com
---
Jo
keepitswinging.domain@gmail.com 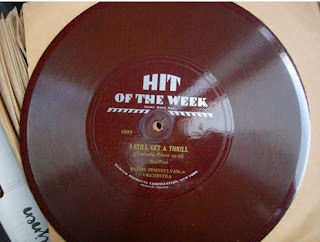 Hans Koert, who passed away in September 2014, was a passionated jazz collector and the author of the Hit of the Week and Durium Discography. 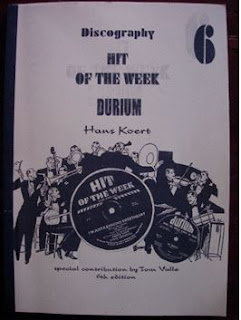 This entry is to inform you that Hans Koert's collection and archives of the HoW/Flexible Records now have been handed over to the files of the Doctor Jazz Foundation in The Netherlands.

For interested researchers/collectors it is possible to contact the Doctor Jazz Foundation for further information using the following link.
---
Jo
keepitswinging.domain@gmail.com

Jelly Roll Morton emphazised the importance of the 'Spanish tinge' as an inevitable ingredient in jazz referring to the influence of the habanera and the Caribbean tango in the rhythm pattern of compositions worthy of the term jazz. Morton's solo piano renditions of compositions of his own like i.e. 'New Orleans Joys', 'Mamanita', 'Creepy Feeling' and not least the perhaps best know example: 'The Crave' are all elaborated pieces of music which demonstrate his conception of the Spanish tinge. The legendary 1938 Library of Congress recordings contain some examples which Morton did not record commercially, among them 'Spanish Swat' in focus here to announce a great contemporary project initiated by pianist Andrew Oliver and reed player David Horniblow. The duo has started a project to play all of Morton's compositions in a duo setting and record the performance in a video format to be uploaded at You Tube; here's the duo's rendition of Morton's 'Spanish Swat' - from the latest update of the project uploaded earlier today

As mentioned, the duo intends to play and record all of Morton's compositions in this setting - the project estimates to have two new compositions uploaded every week this year. You can read more about the project at Andrew Oliver's website, and subscribe to the videos at the You Tube channel devoted to the project, here. Up till now 12 videos have already been uploaded - and what a thrill to have free access to these contemporary renditions of Morton's music, revitalized by two great musicians. Do not hesitate to subscribe to the video channel and learn more about the duo at Andrew Oliver's website.

I'll insert another example of the duo's fine video performance to end this, here's Andrew Oliver and David Horniblow's rendition of Morton's 'Mamanita'