Django Reinhardt and Stéphane Grappelli in the Netherlands (1937) - Part one

Georg Lankester, expert in the French pre-WWII jazz scene, Django Reinhardt and the Quintet of Hot Club de France, gives an account of the first visit of QHCF in the Netherlands. Below follows part one, the second part will be published later.


Django Reinhardt was born in 1910 and proved already in his youth to be a highly gifted musician. Playing on his six strings’ banjo, which his gypsy family had given him,  he became a star at the popular Musette balls, sought after by the accordionists in Paris at the end of the Twenties.
Great musicians such as Gusti Malha and Poulette Castro had taught him the basic principles of playing, but the boy gradually developed his own playing technique which no other banjoist could equal.
The young artist won prizes and earned a lot of money since the top accordion players wanted to be accompanied by him. That’s why e.g. Jean Vaissade already made records with Django in the early days of the grammophone.
After a fire accident in his caravan (November 1928) which caused severe burns on his left leg and arm, a long recovery time followed. It took 18 months before he would come back on stage in Paris. His left hand remained crippled and only allowed the use of two fingers.
The last few months of his rehabilitation a member of the family had handed him a guitar for distraction and – who would have expected this? – he then developed a new playing technique adapted to his handicap.
So in the early Thirties Django – now as a guitarist - came back into the Parisian music scene and could be heard with singers.
The very popular singer Jean Sablon selected him for his small group and in 1933/34 several beautiful songs were recorded in France, followed by BBC radio broadcasts in England and performances in the Casino of Monaco. But Django was also attracted by new American jazz themes like “Tiger Rag,“After you’ve gone”and many others.
He then met violinist/piano player Stéphane Grappelli which, on the initiative of the Hot Club de France leaders would result in the founding of the first jazz string quartet in the world. The two star soloists soon made a name in Europe as well in the USA and their performances were received with astonishment and admiration. 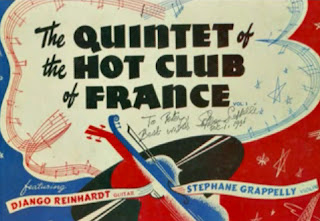 A year full of jazz
1937 would become a remarkable and historical year with lots of surprises as to the Jazz in Europe. Since the foundation of the Hot Club quintet, the group had got quite a reputation. The two star soloists on guitar and violin, accompanied by a strong rhythm section had great success, not only in Europe but also in America. Their records were sold everywhere and these even are available till the present day.
A huge event was going to take place, for in 1937 the great World Exhibition in Paris would be held, a reason for the Hot Club de France leaders (in particular Charles Delaunay and Hugues Panassié) to invite American jazz giants to France for concerts and recording sessions. And so it happened.
However, already several months before this event, the celebrated quintet was invited to perform at the 5th ‘Jazz World’ party in Holland. The initiative was taken by the Dutch Jazz Liga, managed by Eddy Crommelin and sponsored by magazine “Jazzwereld” (Jazz World).
And  – for the very first time - the illustrious formation travelled to the Netherlands.
On Saturday July 10 one could speak of a full house in the big ‘Kurhaus’ ballroom for a memorable gala concert. 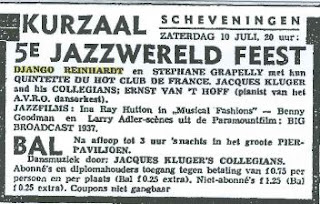 As can be seen from the attached advertisement, this party was rounded off by a ball with the Dutch band “Jacques Kluger’s Collegians’ and piano player Ernst van ’t Hoff.  Moreover people could watch that evening films of Benny Goodman and others.
After this very special event,  the abovementioned magazine published a favourable review. Due to this report we get a good impression of the program which was presented that particular night whereby several performed themes are described. 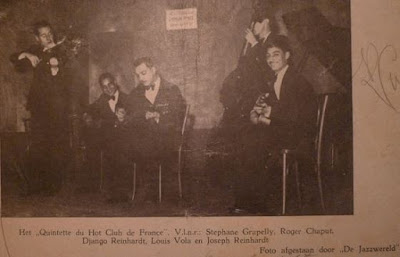 We learn that the quintet opened with “Exactly like you” which – according to the reporter – immediately excited the audience. Then people could listen to “Limehouse blues” and “Blue  Drag” followed by “Honeysuckle rose”, Django’s “Boléro” and the “Tiger Rag”, all described as  ’superb performances’. As to the two star soloists, expressions were used as ‘fully inspired, highly emotional, dynamic performances with touching inflexions’. Those words would be impossible to use in our times!
After the break we read that compositions like “Speevy”, “I’ve had my moments”and “In the still of the night”were played and again the reporter is very favourable about them and continues:
Then a funny thing happened. Immediately after the final theme was played a  few strong guys entered the stage, picked up the bass and carried it away,  till – in a hurry – it was decided to put it back again, which took a while. All this caused, of course,  great merriment.
To round off their program the quintet ended with”Moonglow” and “Nagasaki” enthusiastically received by all persons present.