Today the phenomenal Danish jazz violinist, Svend Asmussen,  can celebrate his 100th birthday. The Keep(it)swinging blog likes to mark this great day by inserting some examples of music by Svend Asmussen from a career that spans more than 80 years of artistic activity at an absolute toplevel by international standards. A short career profile in English is available here.

Svend Asmussen debuted in 1933 with his own quartet - inspired by Joe Venuti's Blue Four. In 1935 he recorded his first record under his own name Tiger Rag / My Blue Heaven with a sextet - Here is Tiger Rag

In 1940, Svend Asmussen recorded the initial version of June Night, which has become his signature tune, in a trio setting. Asmussen contributes the lead vocal and plays violin as well as vibraphone

Svend Asmussen's orchestra - most often a quintet with changing sidemen - had great success in Denmark during the 1940s. Denmark was occupied by the German Nazi regime 1940 - 45, which cut off the opportunities of an international career for artists like Svend Asmussen. Nevertheless, some of his best recordings were made in those years, unfortunately mostly unknown outside Scandinavia until much later. Below some highlights recorded in 1940 are inserted to mark this important period of Asmussen's recording career. - Here is first Honeysuckle Rose

Also from 1940, Asmussen and his quintet recorded Some of These Days 18.08.40, the leader again contributes the vocal and great violin playing

Another great recording from this period is the quintet's version of After You've Gone, recorded 11.09.40

Svend Asmussen's career has been rich in facets as a musician, but also as an actor and entertainer. He has appeared in a number of Danish music films and revues 1943-57, where he performed with the siblings Gerda and Ulrik Neumann (1943-45).Cooperation with the latter led to the establishment of the successful trio Swe-Danes (1958-61) with the Swedish singer Alice Babs. - Here I'll mark this corner of Asmussen's career by inserting two examples of  musical entertainment at the highest artistic level, first a TV performance by Asmussen and his companion Ulrik Neumann presented in Dutch TV 1961

Together with Swedish singer Alice Babs, Svend Asmussen and Ulrik Neumann had success internationally as the Swe-Danes, here is a short TV performance of the trio's signature tune, Scandinavian Shuffle

Svend Asmussen has made a number of recordings with internationally acclaimed artists including Duke Ellington, pianists John Lewis, Jan Johansson and Kenny Drew and instrument colleagues Stephane Grappelli and Stuff Smith. - Here's an example from Asmussen's cooperation with Duke Ellington in 1963, Don't Get Around Much Anymore, from Ellington's jazzviolin sessions feat. Stephane Grappelli and Ray Nance besides Asmussen, who is playing the viola

Svend Asmussen stands out as one of the greatest Danish jazz musicians ever. He has enriched the 1900s and the beginning of a new century with a wide range of timeless recordings, ranging from the Swing era of the 1930s and 1940s to seriously balanced cooperation with the best musicians of a younger generation. - To mark the succesfull years of Asmussen's later career with his jazz quartet feat. excellent Danish sidemen including Jacob Fischer on guitar, here's a recording by this ensemble performing Stardust 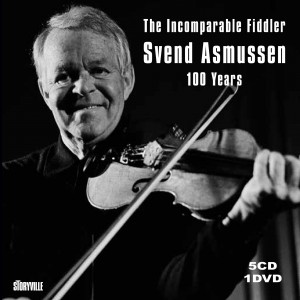