It's generally known that New Orleans was the cradle of Jazz in the early 1900s and Paris, France, was the European center of Le Jazz Hot in the 1930s and 1940s. What would happen, if these two aspects of jazz - the New Orleans Creole tradition and the Gypsy approach of Django Reinhardt and Le Quintette du Hot Club de France - were mixed and put together in a contemporary jazzensemble taking advantage of the hallmarks of both traditions? The new CD by clarinetist Evan Christopher's quartet Django à la Créole gives a convincing answer to that question showing off a repertoire of essential music with roots in both traditions, here recorded live during the quartet's tour of Great Britain, October 2012.

Evan Christopher is an excellent clarinetist from California, who moved to New Orleans in 1994 to take part in the city's rich jazz scene concentrating on his instrument's strong Creole heritage from Sidney Bechet, Omer Simeon, Barney Bigard and beyond. After the hurricane Katrina devastated the city in 2005,

Christopher had an invitation of the City of Paris, France, for an artist residency, funded by a French-American Cultural Exchange program. During this artist residency he worked diligently to raise awareness about the musical culture of New Orleans through concerts and masterclasses. He also formed his own groups, the JazzTraditions PROJECT and Django à la Créole. The ideá and vision of Django à la Créole was to "(...) Spice up the Hot Club texture pioneered by Django Reinhardt by emphasizing hallmarks of New Orleans Jazz including blues, rhythms of the monde Créole, and collective improvisation." (- according to info here ). Django à la Créole had its debut in 2007 with a tour of Great Britain, the quartet featuring Christopher as leader and clarinet further consists of two guitars and string bass. The quartet has recorded two studio albums (released 2008 and 2010), the third album shown above is recorded live during Django à la Créole's performance at four different venues in Wales and England, October 2012. According to Christopher's liner notes , "(...) For us, this kept the music fresh and left room for the unexpected better than if we had used the same room over four evenings."

The CD is released earlier this month by Frémaux & Associés, lejazzetal (CD FA 8501) and is available for purchase here

Django à la Créole's formation on the live-CD tracks has Evan Christopher on clarinet, David Blenkhorn on electric guitar, Dave Kelbie on rhythm guitar and Sebastian Giradot on string bass, and these four great musicians guide us through a repertoire of jazz compositions associatiated with both New Orleans and Django Reinhardt. New Orleans and Dixieland standards like H.Carmichael's "Riverboat Shuffle" and Craemer & Layton's "Dear Old Southland" are presented in new arrangements for the quartet, the last mentioned incorporating the two spirituals “Sometimes I Feel Like a Motherless Child” and “Deep River”, while the first mentioned gets a 'Django-ized' treatment with great solo statements by lead guitarist Blenkhorn. Further there are two compositions by Jelly Roll Morton, "Mamanita" and "The Crave", both key exsamples of Morton's demonstration of the importance of 'The Spanish Tinge' in jazz, here in a quartet arrangement that has captured the subtleties of Morton's original solo piano rendition of the music. Duke Ellington's "The Mooche", a 1929 composition demonstrating Ellington's 'Jungle style', is also featured, here in an arrangement that is based on Ellington's orchestra version anno 1940. Further we have two compositions by Ellington musicians, Johnny Hodges' "One For The Duke" (- based on a strain from 'Ko-Ko' by Ellington) and Rex Stewart's "Solid Old Man", recorded 1939 in Paris featuring Django Reinhardt on guitar and Barney Bigard, clarinet, a.o.. The CD opens with a rendition of Reinhardt's "Douce Ambiance" and has two more compositions by the Gypsy, "Féerie" and "Manoir De Mes Rêves", and the last track has a reading of Archibald Joyce's "Songe d'Automne" made popular by Reinhardt's Quintette du Hot Club de France in the 1940s and here revisited in an arrangement that replaces the original waltz rhythm with a hot Brazialian samba. - Altogether the varied repertoire of the CD gives the listener a great musical experience that mixes influence from both New Orleans Creole tradition, Ellington and  Django Reinhardt's heritage to jazz. The CD has captured the live atmosphere of the recorded tracks in an excellent audio format that encourages the listener to repeated listening, highly recommended!

To give you an impression of the presented music, I'll insert a couple of uploaded videos at YouTube from Django à la Créole's live-performance, here's first a performance from the tour of GB 2012, Duke Ellington's "The Mooche"


Next is a performance of Django Reinhardt's "Manoir De Mes Rêves", recorded in Montargis, France, in 2010


Finally, from the same session, here's a reading of Archibald Joyce's "Songe d'Automne"


To end this small review of Django à la Créole's new CD, I like to quote Evan Christopher from the liner notes of the disc, which emphazises the aim of this excellent quartet: "This project has turned us all into musicologists to some extent. Attention to details, is another way that Django à la Créole distinguishes itself from most groups in this genre. (-) But this study isn’t just pedantry at my behest; it’s how we connect to our music and attempt to share this meaning with our audiences. I have always contended that New Orleans music is best approached as a “world music” and the “créolité” of our project intentionally goes beyond New Orleans by embracing many wonderful musics united by the ancestral West-African “clavé”. Django à la Créole emphasizes this solid foundation in the roots of the music, not just for the sake of authenticity and responsible use of stylistic vocabulary, but because these roots offer the most universally compelling aspect of music-making. Anywhere in the world we perform, regardless of how people identify themselves culturally, we believe that meaningful musical experiences bring people together by celebrating creativity and community."
---
Jo
keepswinging@live.nl 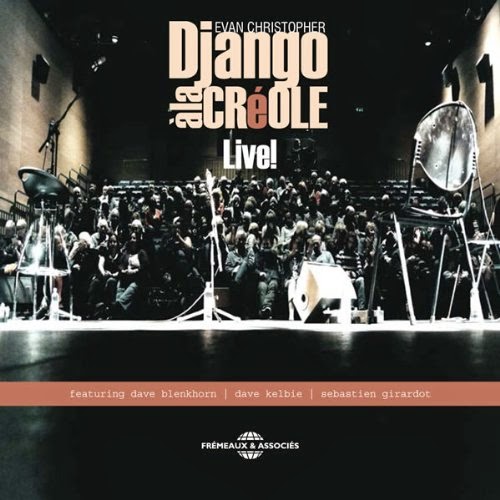 What happens when the New Orleans Creole tradition of jazz and the Gypsy approach of Django Reinhardt and Le Quintette du Hot Club de France are mixed and put together in a contemporary jazzensemble taking advantage of the trademarks of both traditions? The new CD by clarinetist Evan Christopher's quartet Django à la Créole gives the listener a convincing answer to that question showing off a repertoire of essential music with roots in both traditions. The CD was recorded live in October 2012 during the quartet's tour of Great Britain at four diverse venues and has captured the atmosphere of the performance by the ensemble in a highly recommended issue of the presented music.